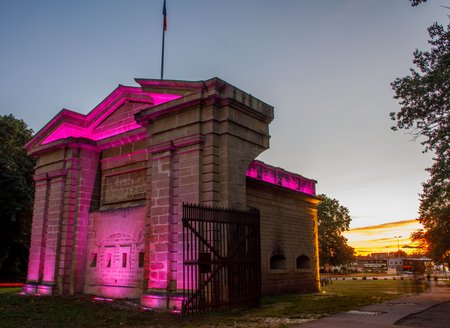 Built between 1746 and 1752, it illustrates the architectural simplification of the fortified gates in the middle of the 18th century. At that time, the cost of these buildings that symbolised the power of the sovereign had to be reduced.

After the Annexation of 1871, the gate underwent great changes. The mouldings on the pediments and cornices and other motifs representing royalty are the only sculpture on the Sarrelouis gate.

After the Annexation of 1871, the gate underwent great changes. Between 1887 and 1890 it was converted into a blockhouse. The adjoining ramparts were demolished to allow new traffic lanes, the moat was filled in and the drawbridge removed.

The ancient passage being no longer necessary was walled up and crenels were added to it. The building lost a full third of its initial height. Grids were installed and the interior of the building refitted in order to meet the military modernity of the late nineteenth century, with devices such as armoured shutters protecting the occupants in the event of an attack. A reinforced concrete protection covered with stone completed the decoration.

The stronghold was dismantled, but Thionville retained the right to collect excise duty until 1939.